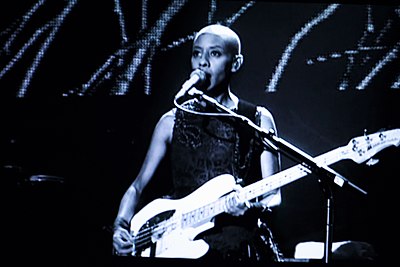 Gail Ann Dorsey (born November 20, 1962) is an American musician. With a distinguished career as a session musician, she is perhaps best known for her long time in David Bowie's band, from 1995 to the present day. Aside from playing bass, she occasionally has sung lead vocals according to Bowie's introduction on A Reality Tour, on "Under Pressure", and duetted with him on others, including "The London Boys", "I Dig Everything", accompanying Bowie on clarinet, and a cover of Laurie Anderson's "O Superman".From 1993 to 1996, Dorsey also recorded and toured extensively with Tears for Fears, and collaborated on songwriting within the band. She appeared in several of the band's promo videos throughout this period. Her diverse range of work includes performances and/or recordings with, among others, David Bowie, Lenny Kravitz, Bryan Ferry, Boy George, the Indigo Girls, Khaled, Jane Siberry, The The, Skin, Gwen Stefani, Charlie Watts, Seal, Gang of Four, Susan Werner, ani difranco and Dar Williams.In addition, Dorsey has released three solo albums: The Corporate World (1988), Rude Blue (1992), and I Used To Be... (2003), and, according to her website, another album is currently in the works.