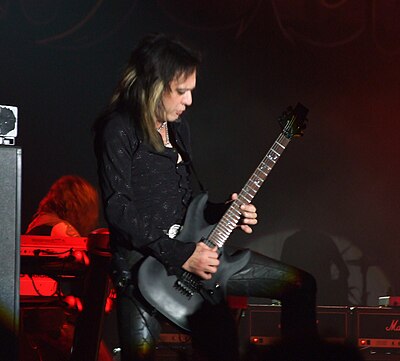 Jeffrey Philip LaBar (born March 18, 1963, in Darby, Pennsylvania) is an American guitarist most famous for playing in the band Cinderella, in which he replaced original guitarist Michael Smerick, also known as Michael Kelly Smith. LaBar also has a side band with Cinderella bandmate Eric Brittingham called Naked Beggars. During Cinderella's temporary break-up in the mid-1990s, LaBar supported himself by running a pizza shop with his brother and by doing assorted construction jobs. LaBar and Cinderella recently completed their 20th anniversary tour with fellow rock veterans Poison, who were also celebrating 20 years in the business.LaBar married Debinique (Debby) Salazar on January 25, 2006 on stage in Pottsville, Pennsylvania before a Blue Öyster Cult concert. In April 2007 LaBar and his wife parted ways with Naked Beggars. They hosted an internet radio show "Late Night with the LaBar's" on www.realityradio.biz. He has a son named Sebastian from a previous marriage.LaBar then joined a new project with Frankie Banali, Tony Franklin, and Markus Allen Christopher. Their debut album, Freakshow, was released in April 2009.2012 - presently with Cinderella