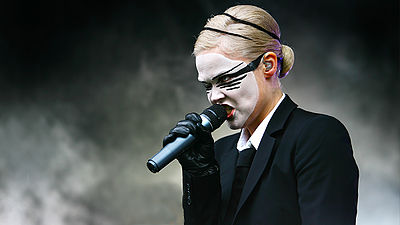 Anja Garbarek (born 24 July 1970) is a Norwegian singer-songwriter of mixed Norwegian and Polish descent. She was born and grew up in Oslo, the daughter of the Norwegian jazz saxophonist Jan Garbarek. She received the Spellemannsprisen in 2001 for her album Smiling & Waving in the open class category. She is married to John Mallison, with whom she has one daughter. She has released three original albums containing English lyrics; Balloon Mood, Smiling and Waving (co-produced by Steven Wilson) and Briefly Shaking, and the soundtrack to Luc Besson's film "Angel-A". Her debut, Velkommen Inn, is sung in Norwegian.Garbarek collaborated with the retired Mark Hollis of Talk Talk on two of her tracks for the 2001 album Smiling & Waving.