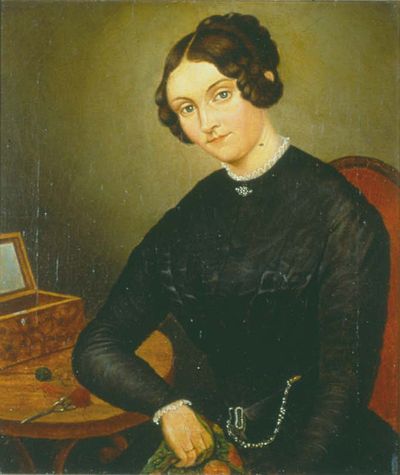 Johanna Kinkel (8 July 1810 – 15 November 1858) was a German composer, writer, and revolutionary. Kinkel was born in Bonn. In 1840, after five months of unhappy marriage, she was divorced from the Cologne bookseller Matthieux. Her second marriage, in 1843, was to the German poet Gottfried Kinkel. They had four children. Following the 1848 Revolutions she was forced to abandon Germany and flee to London. She was found dead in her garden in 1858 from a fall; although suicide was suspected, there was no way to verify this. Her tombstone was inscribed Freiheit, Liebe und Dichtung (meaning Freedom, Love, and Poetry).Kinkel was an author of considerable merit. She wrote on musical subjects, including regular review articles of music events for the Bonner Zeitung, a newspaper she and her husband edited in cooperation with Carl Schurz. An autobiographical novel of hers, Hans Ibeles in London, was published posthumously in 1860. She also had a substantial output of musical compositions. Many of these compositions were written for the Maikäferbund (Maikäfer Group — the Maikäfer being the beetle Melolontha melolontha which emerges from the ground in May), a group of poets — or people who thought they were poets — which she directed and Gottfried also helped lead. This group was founded in 1840 and lasted until the 1848 revolution. It had an annual festival. She also wrote music for her children which was published.She died on 15 November 1858 in London.