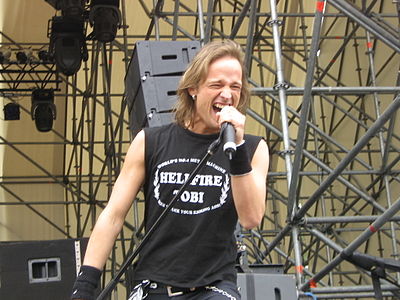 Tobias Sammet (21 November 1977) is a German musician. He is best known as the vocalist and primary songwriter of the power metal band Edguy, as well as the founder, main singer and bassist of the metal opera Avantasia. Prior to Edguy's Theater of Salvation, Tobias was also their bassist and keyboardist. Afterwards, he decided to focus mainly on singing.He also made guest appearances on Rob Rock's album Holy Hell, on the metal opera Aina, and on Revolution Renaissance's New Era album, besides others.He himself enjoys many bands such as AC/DC, Iron Maiden, Kiss, Helloween, and Tom Petty. He has mentioned ex-Helloween singer Michael Kiske, AC/DC's Bon Scott, Kiss's Paul Stanley and Iron Maiden's Bruce Dickinson as vocal influences and inspirations.