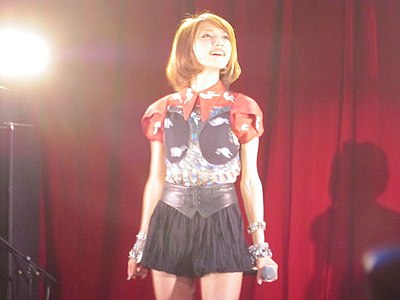 Maki Goto (後藤 真希, Gotō Maki, born September 23, 1985) is a Japanese singer, lyricist, and former actress. Born and raised in Edogawa, Tokyo, Goto began her musical career in 1999 when she joined Morning Musume as the only third generation member. Her first single with the group, "Love Machine", topped the Oricon singles charts and sold over a million copies. Goto was the lead vocalist of the group up until her graduation from the group in 2002. While still a member of Morning Musume, Goto released her debut solo single, "Ai no Bakayarō", in 2001, which topped the Oricon charts. In 2003 she released her debut album, Makking Gold 1, which debuted at number four on the Oricon album charts.In 2007, at her G-Emotion II: How to Use Sexy concert, Goto announced that she was graduating from Hello! Project. In 2008, Goto signed with Avex Group sub-label Rhythm Zone and returned to the music scene at A-nation '08. In 2009, under the stage name Sweet Black feat. Maki Goto, she released her debut mini-album Sweet Black. Goto transferred to Avex Trax in 2010 and released her second mini-album, One, which marked her official comeback as a singer.