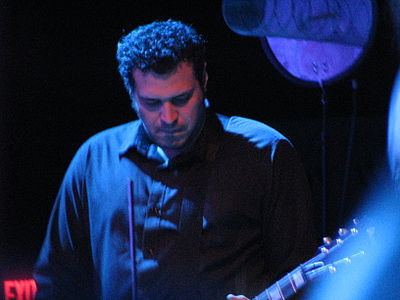 Pablo J. Hinojos-Gonzalez (born on July 17, 1975 in Los Angeles, California) is a Grammy award winning musician, and former member of The Mars Volta, Sparta and At The Drive In. Sometimes credited under the name Paul Hinojos, he was the bass guitarist of At the Drive-In. He met future bandmate Omar Rodríguez-López at the age of 13 and apparently introduced Omar to another close friend and collaborator Cedric Bixler-Zavala. Rodriguez-Lopez and Bixler-Zavala would later ask him to join At the Drive-In after some significant member changes, making him a part of the band's most successful line up. After At the Drive-In took an indefinite hiatus in 2001, Hinojos, along with fellow ATDI members Jim Ward and Tony Hajjar, formed the band Sparta.Hinojos left Sparta in 2005, quoted as saying, "My time with Sparta has run its course, and simply wasn't fun anymore." A few days later, it was announced that he had joined The Mars Volta, where he took up the role of 2nd guitar in addition to 'sound manipulator' (previously occupied by Jim Ward's cousin Jeremy). In February 2009 at the 51st annual Grammy Awards, Hinojos, along with fellow Mars Volta bandmates was awarded the Grammy for Best Hard Rock Performance for the song "Wax Simulacra", from the album "The Bedlam in Goliath". Hinojos left The Mars Volta later in 2009 after being asked by Rodriguez-Lopez, in order to strip the band's sound down for their album "Octahedron".In addition his solo project Hour of the Monarchy, he has worked with producer Gabriel Gonzalez and plans on releasing their first EP Negativa. Hinojos also co-produced the film The Sentimental Engine Slayer with his fellow former The Mars Volta bandmates Omar Rodríguez-López and Juan Alderete.Recently, Hinojos has been working on a new project with Daniel Anderson (of Idiot Pilot), Mark Gajadhar and Cody Votolato (of The Blood Brothers), and rapper Hyro Da Hero. He is also in Dios Kilos along with other familiar collaborators Eric Salas, Ralph Jasso, and Gabriel Gonzalez.Collaborates with Cody Votolato (of The Blood Brothers) in Jaguar Love (Seattle, WA)as well as a new yet unnamed project in the works for 2013In January 2012, Hinojos reunited with his bandmates of At the Drive-In and played at Red7 in Austin,Tx, their first show in 11 years.