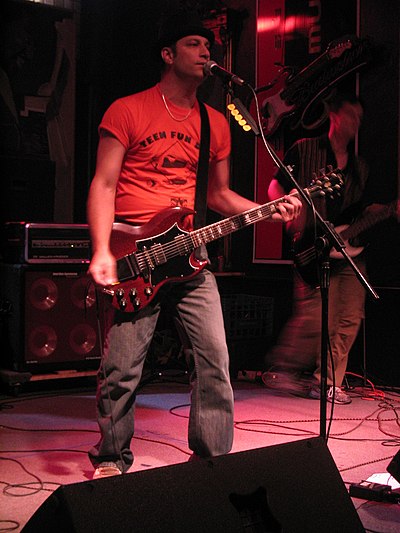 Bruce McDaniel (born September 23, 1962) is an American musician, composer, producer and recording engineer, currently living in New York.Bruce McDaniel was born in Boston, Massachusetts of Mexican and Scottish/American parents on 23 September 1962 and grew up in New York. He was raised by musical parents who met while attending the Juilliard School of Music. He had an early start in NYC's underground punk rock scene as lead guitarist for the Sic F*cks with Tish Bellomo and Snooky Bellomo, a band who, despite the inability to have their name said on the radio, parlayed their comedy-punk spectacle to a feature in Playboy Magazine and movie appearances, including 1982's Alone in the Dark.After the dissolution of the late '70s punk scene, McDaniel laid low for much of the '80s, recording jingles and demos. A group of these demos, recorded under the name Life of Riley (featuring Peter Engisch and Perry Gartner) were picked up by Grammy-award nominated producer Paul Wickliffe, who produced an album's worth of material for the group, only to have the arrangement (and the group) dissolve under contract disputes. Several of these tracks can be heard on the McDaniel/Gartner collection Ongepotchket.Through the '90s, he served as guitarist and bassist for R&B singer Vaneese Thomas, daughter of soul icon Rufus Thomas, known for her 1987 top 20 hits "Let's Talk It Over" and "(I Wanna Get) Close To You". McDaniel was ultimately elevated to the role of musical director of her touring band, a job which he still holds.The '90s also saw the formation of McDaniel's band Nine Men's Morris and their first release Monster In My Stomach on Segue Records. McDaniel provided the songs, guitars and lead vocals, and was joined by Gartner on drums and bassist Donald Kyle. The follow-up album, It's A Wonderful Life, was released in 2004 to excellent reviews, with the title cut being featured on MTV's show Made.In 2000, McDaniel extended his musical horizons by composing a ballet, Alice in Wonderland, set on the East Coast Youth Ballet. The ballet was performed in 2001 and 2002 at the Rich Forum and Palace Theater in Stamford, Connecticut to sold-out houses and rave reviews.McDaniel has also performed/recorded with Gil Parris, Valerie Capers, Carla Thomas, Paul Shaffer, Randy Brecker, Shawn Pelton, Sid McGinnis, Kirk Whalum, Jill Sobule, Nick Moroch, Paul Adamy, Shelton Becton, Chieli Minucci, Philippe Saisse, Eileen Ivers, Tommy Mandel, Napoleon Murphy Brock, Mike Keneally, Wycliffe Gordon, David Spinozza, Bernie Williams, and the Ed Palermo Big Band, among others.As of December 2006, he is the lead vocalist and guitar player for Nine Men's Morris, and can be seen performing the music of Frank Zappa with the Ed Palermo Big Band.In 2008 he composed the score for the film School Play, which won the Best Documentary Film award at the Big Apple Film Festival in NYC.In late 2008 he produced the album Eddy Loves Frank for the Ed Palermo Big Band, which was released in spring of 2009. Eddy Loves Frank spent 10 weeks in the CMJ Jazz charts top 20, peaking at #5.In 2010 and 2011, McDaniel provided the music for Climate Week NYC.As of 2009, the reformed Sic F*cks have been performing sporadically in and around New York City with McDaniel on guitar. In November 2011, they performed in Hamilton, Ontario with guests J.P. Patterson of The Dictators, Albert Bouchard of Blue Öyster Cult and Gord Lewis from Teenage Head.As of 2011, McDaniel is performing with a reformed lineup of punk rock legends the Tuff Darts, filling the guitar role of the late Jeff Salen.