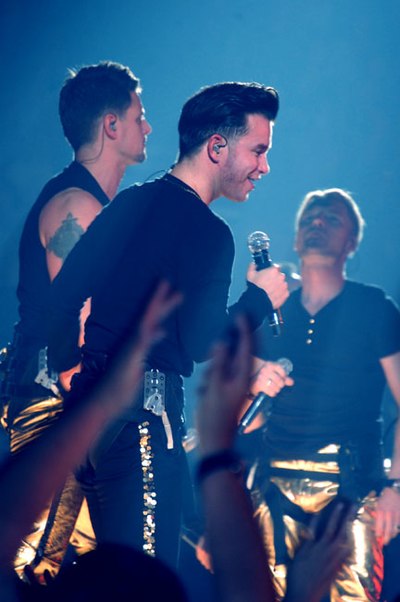 Stephen Patrick David Gately (17 March 1976 – 10 October 2009) was an Irish pop singer-songwriter, actor, children's writer and dancer, who, with Ronan Keating, was one of two lead singers of the pop group Boyzone. Gately and Keating originally served as co-frontmen, but Keating gradually became more synonymous with the group as time went on. All of Boyzone's studio albums hit number one in the United Kingdom, their third being their most successful internationally. With Boyzone, Gately had a record-breaking sixteen consecutive singles enter the top five of the UK Singles Chart. He performed for millions of fans globally. He released a solo album in 2000, after the group's initial break-up, which charted in the UK top ten and yielded three UK hit singles, including the top three hit "New Beginning". Gately went on to appear variously in stage productions and on television programmes as well as contributing songs to various projects. In 2008, he rejoined his colleagues as Boyzone reformed for a series of concerts and recordings.Gately wed Andrew Cowles, first in a commitment ceremony in Las Vegas in 2003 and more formally in a civil partnership ceremony in London in 2006. Gately made his sexuality known in 1999 and came out in a blaze of publicity. Upon Boyzone's reformation, Gately featured as part of the first gay couple in the music video for "Better", in what was to be his last with the band. Gately died in a flat that he and Cowles owned in Majorca, Spain, on 10 October 2009. Brian Boyd in The Irish Times stated: "Stephen Gately’s death represents the first time that the boyband genre has had to deal with such a tragic situation". Tim Teeman of The Times (UK) heralded Gately as a hero of gay rights for his response to being "smoked out of the closet".