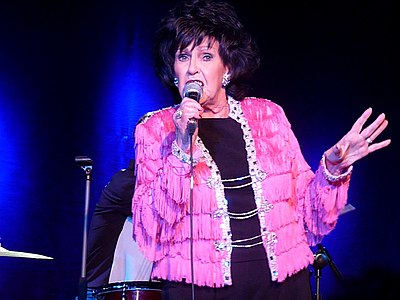 Wanda Lavonne Jackson (born October 20, 1937) is an American singer, songwriter, pianist and guitarist who had success in the mid-1950s and '60s as one of the first popular female rockabilly singers and a pioneering rock and roll artist. She is known to many as the Queen (or First Lady) of Rockabilly.Jackson mixed country music with fast-moving rockabilly, often recording them on opposite sides of a record. As rockabilly declined in popularity in the mid-1960s, she moved to a successful career in mainstream country music with a string of hits between 1966 and 1973, including "Tears Will Be the Chaser for Your Wine", "A Woman Lives for Love" and "Fancy Satin Pillows".She has enjoyed a resurgence of popularity among rockabilly revivalists in Europe and younger Americana fans, and was inducted into the Rock and Roll Hall of Fame as an Early Influence in 2009.