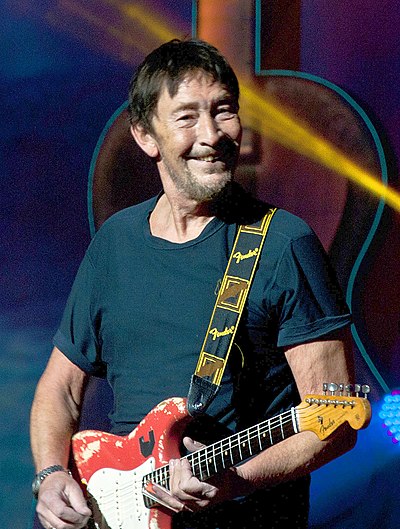 Chris Rea (/ˈriːə/ REE-ə; born Christopher Anton Rea, 4 March 1951)is an English singer-songwriter, recognisable for his distinctive, husky voice and slide guitar playing. The British Hit Singles & Albums stated that Rea was "one of the most popular UK singer-songwriters of the late 1980s. He was already a major European star by the time he finally cracked the UK Top 10 with his 18th chart entry; 'The Road to Hell (Part 2)'." By 2009, Rea had sold more than 30 million albums worldwide.He is well known for his 1978 hit song "Fool (If You Think It's Over)" that charted #12 on the Billboard Hot 100 and spent three weeks at #1 on the U.S. Billboard adult contemporary chart. The song was later covered by Elkie Brooks and was a top 20 hit in the UK.Although Rea had limited success in the United States, two of his albums, The Road to Hell and Auberge, topped the UK Albums Chart. The book Guinness Rockopedia described him as a "gravel-voiced guitar stalwart".