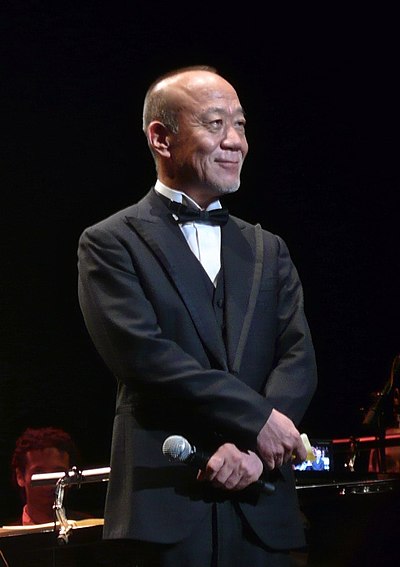 Mamoru Fujisawa (藤澤 守, Fujisawa Mamoru), known professionally as Joe Hisaishi (久石 譲, Hisaishi Jō, born December 6, 1950), is a composer and musical director known for over 100 film scores and solo albums dating back to 1981.While possessing a stylistically distinct sound, Hisaishi's music has been known to explore and incorporate different genres, including minimalist, experimental electronic, European classical, and Japanese classical. Lesser known are the other musical roles he plays; he is also a typesetter, author, arranger, and conductor.He is best known for his work with animator Hayao Miyazaki, having composed scores for many of his films, including Nausicaä of the Valley of the Wind (1984), Laputa: Castle in the Sky (1986), My Neighbor Totoro (1988), Kiki's Delivery Service (1989), Porco Rosso (1992), Princess Mononoke (1997), Spirited Away (2001), Howl's Moving Castle (2004), Ponyo (2008), and The Wind Rises (2013). He is also recognized for the soundtracks he has provided for filmmaker 'Beat' Takeshi Kitano, including A Scene at the Sea (1991), Sonatine (1993), Kids Return (1996), Hana-bi (1997), Kikujiro (1999), and Dolls (2002) and also for a video game called Ni no Kuni. He was a student of legendary anime composer Takeo Watanabe.[citation needed]