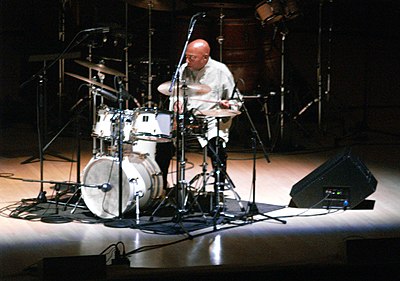 Roy Owen Haynes (born March 13, 1925, in the Roxbury section of Boston, Massachusetts) is an American jazz drummer and bandleader. Haynes is among the most recorded drummers in jazz, and in a career lasting more than 60 years has played in a wide range of styles ranging from swing and bebop to jazz fusion and avant-garde jazz. He has a highly expressive, personal style ("Snap Crackle" was a nickname given him in the 1950s) and is known to foster a deep engagement in his bandmates.[citation needed]He has also led his own groups, some performing under the name Hip Ensemble. His most recent recordings as a leader are Fountain of Youth and Whereas, both of which have been nominated for a Grammy Award. He continues to perform worldwide.His son Graham Haynes is a cornetist; his son Craig Haynes and grandson Marcus Gilmore are both drummers.