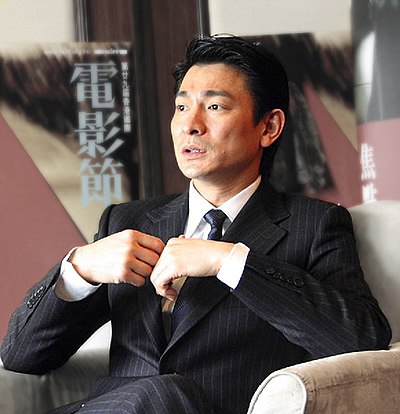 Andy Lau MH, JP (Lau Tak-wah; born 27 September 1961) is a Hong Kong Cantopop singer, actor, presenter, and film producer. Lau has been one of Hong Kong's most commercially successful film actors since the mid-1980s, performing in more than 160 films while maintaining a successful singing career at the same time. In the 1990s, Lau was branded by the media as one of the Four Heavenly Kings of Cantopop (四大天王) along with Aaron Kwok, Jacky Cheung and Leon Lai.In 2005, Lau was awarded "No.1 Box office Actor 1985–2005" of Hong Kong, yielding a total box office of HKD 1,733,275,816 for shooting 108 films in the past 20 years. The aforementioned figure is as compared to the first runner-up Stephen Chow's (HKD 1,317,452,311) and second runner-up Jackie Chan's (HKD 894,090,962). "I've never imagine that it would be as much as 1.7 billion!" he told the reporters. For his contributions, a wax figure of Lau was unveiled on 1 June 2005 at the Madame Tussauds Hong Kong. In 2007, Lau was also awarded the "Nielsen Box Office Star of Asia" by the Nielsen Company (ACNielsen).He also entered into Guinness World Records for "Most Awards Won by a Cantopop Male Artist". By April 2000, he had already won a total unprecedented 292 awards.