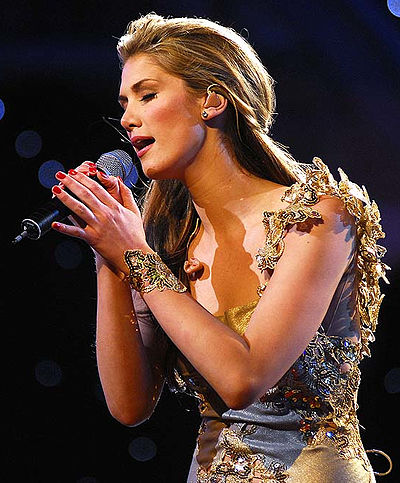 Delta Lea Goodrem (born 9 November 1984) is an Australian singer-songwriter, pianist, and television actress. Born and raised in Sydney, Australia, she enrolled in dancing, acting, singing and piano classes at a young age. She began her career as a child actress, starring in various television shows and rose to prominence in 2002 in the Australian soap opera Neighbours as Nina Tucker.Venturing into the music industry, Goodrem recorded an album entitled Delta through an independent label, which was never released due to legal reasons. Subsequently signing to Sony at the age of 15, she released her multi-platinum album Innocent Eyes which topped the Australian Albums Chart and reached number two on the UK Albums Chart. It became one of the highest-selling albums in Australian history, with over 4 million copies sold worldwide and all five of its singles; "Born to Try", "Lost Without You", "Innocent Eyes", "Not Me, Not I", and "Predictable" reaching number one in Australia and the first three reaching the top ten in the UK. This gave her the record for becoming the first ever artist to have five number one singles from a debut album.Each of her subsequent albums followed with similar commercial success on the ARIA Albums Chart. Her second studio album, Mistaken Identity, was created while she was suffering from cancer (and several of its themes reflect this) and became her second consequent number one album. In 2007, she released Delta, her third number one album and in 2012 she released her fourth studio album Child of the Universe which reached number two. Goodrem has continued to have a string of top ten hits, including "Out of the Blue", "Mistaken Identity", "Together We Are One", "In This Life", "Believe Again", "Sitting on Top of the World", "Wish You Were Here" and "Heart Hypnotic". Goodrem has achieved eight number one singles and three number one albums in her home country. As of the early 2010s, she holds the Australian record for the highest-selling album of the last decade and the most number one singles from a debut album. From 2012 to 2013, she was a coach on The Voice Australia, and will appear on The Voice Kids Australia in 2014.