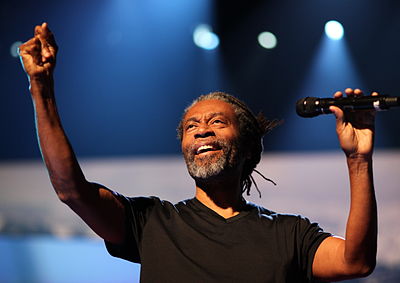 Robert Keith "Bobby" McFerrin, Jr. (born March 11, 1950) is an American vocalist and conductor. He is best known for his 1988 hit song "Don't Worry, Be Happy". He is a ten-time Grammy Award winner. He is known for his unique vocal techniques, including giving the illusion of polyphony by singing an accompaniment alongside the melody, making use of percussive effects and making large jumps in pitch; as well as improvising much of his performed music, including melody, chords and sounds in a form of scat singing. He is also known for having performed and recorded regularly as an unaccompanied solo vocal artist. He has frequently collaborated with other artists, from both the jazz and classical scenes.