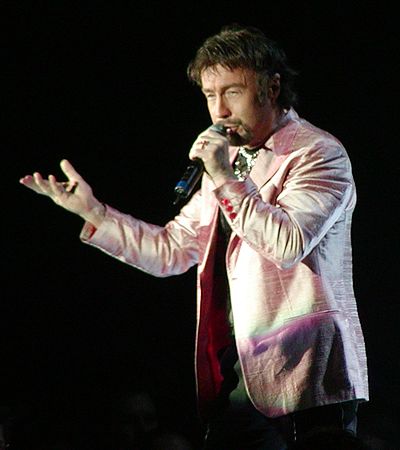 Paul Bernard Rodgers (born 17 December 1949) is an English rock singer-songwriter, best known for his success in the 1970s as vocalist of Free and Bad Company. After stints in two less successful bands in the 1980s and early 1990s, The Firm and The Law, he became a solo artist. He has more recently toured and recorded with another 1970s band, Queen. Rodgers has been dubbed "The Voice" by his fans. A poll in Rolling Stone magazine ranked him number 55 on its list of the "100 Greatest Singers of All Time".Rodgers has been cited as a significant influence on a number of notable rock singers, including David Coverdale, John Waite, Steve Overland, Lou Gramm, Jimi Jamison, Eric Martin, Steve Walsh, Joe Lynn Turner, Paul Young, Robin McAuley, Jimmy Barnes, Richie Kotzen and Joe Bonamassa. In 1991, John Mellencamp called Rodgers "the best rock singer ever." Freddie Mercury of Queen in particular liked Rodgers and his aggressive style.