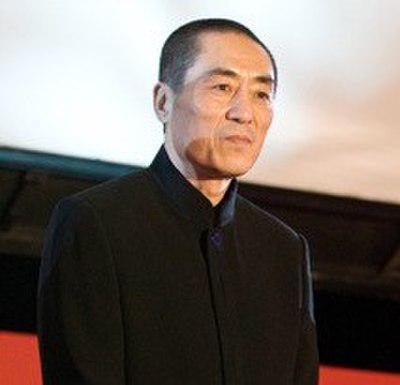 Zhang Yimou (Mandarin pronunciation: [tʂɑ́ŋ îmɤ̌ʊ̯]) (born 14 November 1951) is a Chinese film director, producer, writer and actor, and former cinematographer. He is counted amongst the Fifth Generation of Chinese filmmakers, having made his directorial debut in 1987 with Red Sorghum.Zhang has won numerous awards and recognitions, with Best Foreign Film nominations for Ju Dou in 1990 and Raise the Red Lantern in 1991, Silver Lion and Golden Lion prizes at the Venice Film Festival, Grand Jury Prize at the Cannes Film Festival, and the Golden Bear at the Berlin International Film Festival. In 1993, he was a member of the jury at the 43rd Berlin International Film Festival. Zhang directed the opening and closing ceremonies of the 2008 Beijing Summer Olympic Games, which received considerable international acclaim.One of Zhang's recurrent themes is the resilience of Chinese people in the face of hardship and adversity, a theme which has been explored in such films as, for example, To Live (1994) and Not One Less (1999). His films are particularly noted for their rich use of colour, as can be seen in some of his early films, like Raise the Red Lantern, and in his wuxia films like Hero and House of Flying Daggers. His most recent film is a historical drama war film called The Flowers of War.