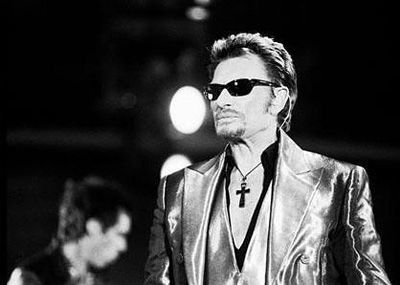 Jean-Philippe Smet, known by his stage name Johnny Hallyday, French pronunciation: ​[dʒɔ.ni a.li.dɛ] (born 15 June 1943, Cité Malesherbes, Paris, France) is a French singer and actor. An icon in the French-speaking world since the beginning of his career, he was considered by some to have been the French Elvis Presley. He was married for 15 years to popular Bulgarian-French singer Sylvie Vartan and the two were considered a "golden couple" for 20 years. Hallyday has completed 181 tours, had 18 platinum albums, and has sold more than 110 million records. He announced his retirement from performing on 3 December 2007, saying that he would retire in 2009, after a farewell tour. However, Hallyday announced in March 2012 that he would perform in Los Angeles on 24 April, in Quebec City on 10 July and in New York City on 7 October, and he has continued to tour throughout the world (including Europe, North America, and Asia) through 2014.Hallyday remains largely unknown outside of France, Belgium, Switzerland and Quebec, thus earning the nickname "the biggest rock star you've never heard of" in English-speaking countries. Nevertheless, at an international level he is still considered as the only non-Anglophone Rock’n Roller having a large international reputation. He was made Chevalier (Knight) of the Légion d'honneur in 1997.