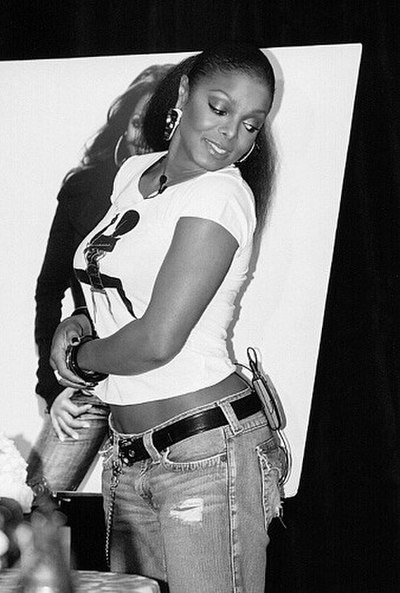 Janet Damita Jo Jackson (born May 16, 1966) is an American recording artist and actress. Known for a series of sonically innovative, socially conscious and sexually provocative records, as well as elaborate stage shows, television appearances, and film roles, she is a prominent figure in popular culture.After signing a recording contract with A&M, she came to prominence following the release of her third studio album, Control (1986). Her collaborations with record producers Jimmy Jam and Terry Lewis incorporated pop with elements of rhythm and blues, dance, funk, rock, and industrial overtones, leading to appeal in popular music. Her fourth album, Rhythm Nation 1814 (1989), focused on socially conscious themes and various musical styles, and made Jackson the only artist in history to garner seven top five singles from the same album. In addition to receiving recognition for the innovation of her records, choreography, music videos, and prominence on radio and music channels, she was acknowledged as a role model for her lyrical substance.Jackson signed the first of two record-breaking, multimillion dollar contracts with Virgin Records, establishing her as one of the industry's highest paid artists. Her debut album under the label, janet. (1993), saw her develop a public image as a sex symbol as she began to explore carnality in her work. Upon its release, she played the starring role in the film Poetic Justice; and has continued to act in feature films, including The Nutty Professor II: The Klumps and the Why Did I Get Married? franchise. Her following album, The Velvet Rope (1997), discussed themes of depression and sadomasochism, spawning the biggest hit of her career, "Together Again". By the end of the nineties, Billboard named her the second most successful recording artist of the decade, following Mariah Carey. Jackson's seventh album, All for You (2001), returned to an upbeat, optimistic sound. It was succeeded by Damita Jo (2004), 20 Y.O. (2006), and Discipline (2008).Having sold over 140 million records, she is ranked as one of the best-selling artists in the history of contemporary music. The Recording Industry Association of America (RIAA) lists her as the eleventh best-selling female artist in the United States, with 26 million certified albums. In 2012, Billboard declared Jackson the seventh most successful female artist of the past twenty years, the ninth most successful overall, and was previously ranked second during the mid-decade. In 2010, the publication declared her as the fifth most successful R&B artist of the past twenty-five years. She is currently the third most successful artist on the Hot Dance Club Songs chart. Jackson has a total of five albums among the Rock and Roll Hall of Fame's "Definitive 200 Albums", Rolling Stone's "500 Greatest Albums of All Time", and The Telegraph's "120 Essential Pop Albums", considered among the most influential in popular music. She has amassed an extensive catalog of hits, with singles such as "Nasty", "Rhythm Nation", "That's the Way Love Goes", "Together Again", and "All for You" her most iconic.One of the world's most awarded artists, her longevity, records and achievements reflect her influence in shaping and redefining the scope of popular music. Her influence is thought to rival that of Madonna and Michael Jackson.Jackson's accolades include six Grammy Awards, an Emmy Award, MTV's Video Vanguard Award, and Academy Award and Golden Globe Award nominations. She has been awarded the Radio Music Award's "Legend Award", Recording Academy's "Governor's Award", Billboard Award's "Artistic Achievement Award", MTV's inaugural Icon tribute, American Music Award's "Award of Merit", MTV Japan's "Inspiration Award", and was also the recipient of the "Legend Award" at the World Music Awards. Her film career has garnered industry recognition, receiving MTV Movie Awards and Image Awards. Jackson holds a record of over thirty Billboard Awards, and is the only artist in history to receive Grammy nominations spanning five different genres.