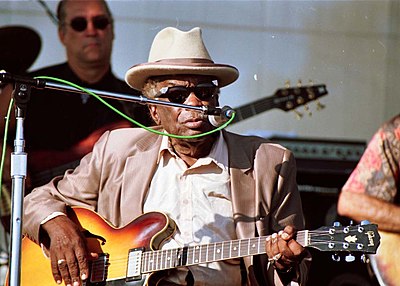 John Lee Hooker (August 22, 1917 – June 21, 2001) was a highly influential American blues singer, songwriter and guitarist. Hooker was born in Mississippi, he was the son of a sharecropper, and rose to prominence performing his own interpretation of what was originally a unique style of country blues. He developed a 'talking blues' style that became his trademark. Though similar to the early Delta blues, his music was metrically free. John Lee Hooker could be said to embody his own genre of the blues, often incorporating the boogie-woogie piano style and a driving rhythm into his blues guitar playing and singing. His best known songs include Boogie Chillen' (1948), I'm in the Mood (1951), and Boom Boom (1962)—the first two reaching #1 on the Billboard R&B chart.