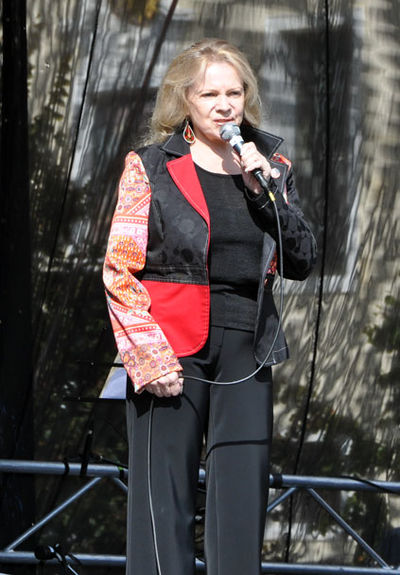 Eva Pilarová (born 9 August 1939, in Brno) is a Czech singer and actress. Four times winner of the Golden Nightingale in category singers in accordance to the reader's poll Golden Nightingale.[citation needed] In 1967, she won the International Intervision Song Contest in Bavaria and was awarded the Grand Prix du Disque for her interpretation of "Requiem".She was singing since childhood, including classical music. In 1960, she became a member of Semafor theater where she performed, among other things, with the legendary couple Jiří Suchý and Jiří Šlitr.[citation needed] In 1962, for a short time, she left to sing in Theaters Rokoko, but in 1964 returned to Semafor. In the same year they also played a minor role in the film If a Thousand Clarinets (as a chorus-singer of the girl school - with Naďa Urbánková and others). During her long singing career she sang large number of hits including duets with Waldemar Matuška, Karel Gott and other singers.[citation needed]Eva Pilarová is a singer with a voice flowing with addition of superior singing technique. With the increasing trend are increasingly focuses on the genres of jazz and swing area. In 1977, to continue to act, she signed the Anticharta.