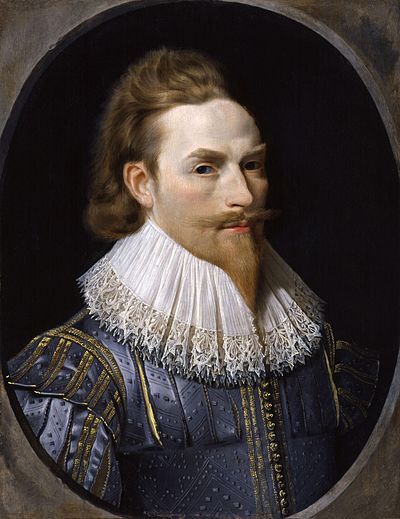 Sir Nathaniel Bacon KB (1585–1627) was a painter and landowner from Culford, Suffolk, England.Only 9 of his paintings survive. He was particularly known for his kitchen and market scenes, dominated by still-life depictions of large vegetables and fruit, often accompanied by a buxom maid, the most well known being "The Cookmaid with Still Life of Vegetables and Fruit" (Tate Gallery London). This predilection for cook or market scenes is much more common among Dutch and Flemish painters, see for example Joachim Beuckelaer, or from a later generation, Pieter Cornelisz van Rijck, and Cornelis Jacobsz Delff.Bacon is credited with the first known British landscape, and also painted a self-portrait and a number of other portraits. He was created a Knight of the Bath in 1625, in honour of the Coronation of Charles I.In 1613, Bacon married Jane, the widow of Sir William Cornwallis, and mother of Frederick Cornwallis, 1st Baron Cornwallis. Bacon died at Culford Hall at the age of 42. He was buried there on 1 July 1627. His daughter, Jane, aged three years, died that same October, and is buried alongside her father. The entries of their burials follow each other in the Culford Parish Burial Register.He was the son of Sir Nicholas Bacon, 1st Baronet.