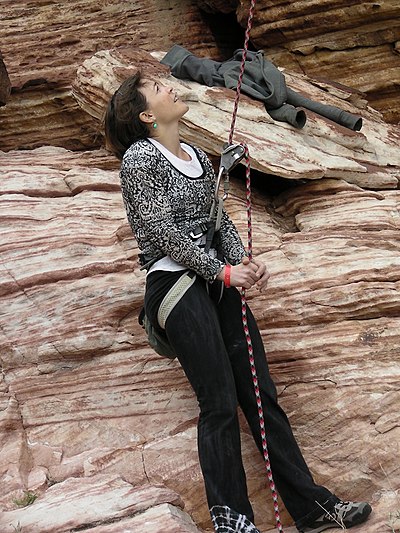 Katie Brown (born 1980 or 1981) is an American female rock climber who has made notable ascents in sport climbing, trad, and bouldering.[citation needed]Brown began sport climbing in Kentucky at the age of 13, and in 1995 aged 14 she won the X Games and a climbing Junior World Championship in Laval.In October 2008, Brown completed an onsight (free-climbing without knowledge of the route) of the northwest face of Yosemite’s Half Dome, and, along with climber Lynn Hill, the first female free ascent of the Leaning Tower.Brown was selected 2009 Hot 20 under 40 by 7x7SF Magazine, and is the author of the book Girl on the Rocks: A Woman's Guide to Climbing with Strength, Grace, and Courage. She was featured in a Citibank ThankYou Card Commercial along with Alex Honnold, climbing Fisher Towers near Moab, Utah.