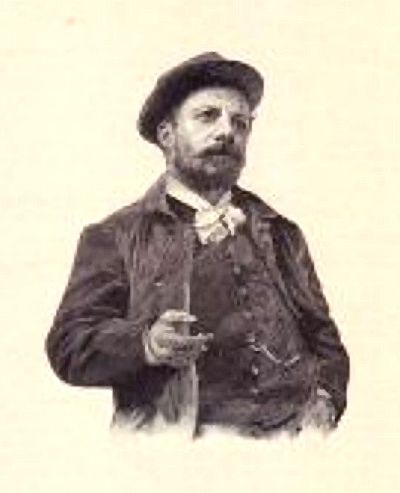 Henri Boutet (1851 Sainte-Hermine, Vendée - 9 June 1919 Paris), "le Petit Maître au corset", was a French Belle Époque artist whose work focused on the genre "La Parisienne". He candidly depicted women ranging from ordinary shop assistants to elegant ladies, managing to portray their common qualities of coquettishness and femininity. His success was in large measure due to his portraying of attractive young women using etching, drypoint and engraving. His prints were often in limited editions of 20. With the growth of his success, Boutet targeted a wider market by doing his own publishing and using the "eau-fort synthetique" process, which resembled a more expensive etching technique. His talent for illustrating led to his producing graphics for magazines, menus and almanacs, items that are today eminently collectable.In 1902 he published "Les Modes Feminines du XIXe Siecle" which met with instant acclaim. His 100 drypoint etchings showed the development of fashion for each year from 1801 to 1900 - drypoint etching results in an image with intrinsic softness of texture. The illustrations were hand-coloured, with close attention to detail, and a treatment that showed his affection for the subject matter. This collection of original etchings was limited to an edition of 600 copies.