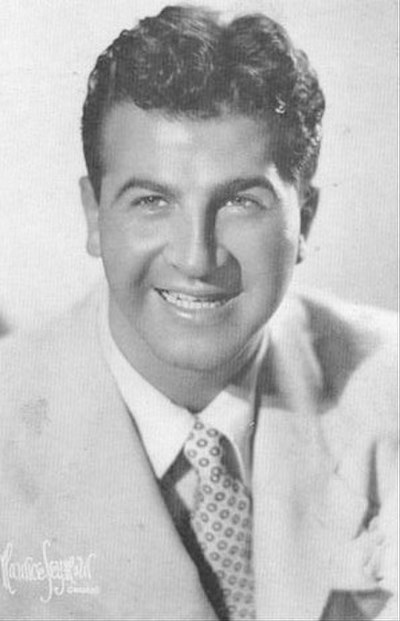 Dick Henry Jurgens (January 9, 1910 – October 5, 1995) was an American swing music bandleader, who enjoyed great popularity in the late 1930s and early 1940s.Dick Jurgens was born in Sacramento, California to Dietrich Heinrich Jurgens and Clara Matilda (Erath) Jurgens. Jurgens played in an orchestra in high school but was kicked out of the ensemble for playing pop music. In response, he formed his own group in 1928 while still a student. His brother Will Jurgens was a member; Will later became Dick's manager during his years of fame. Jurgens then studied at the University of California at Berkeley and Sacramento Junior College (now Sacramento City College) before accepting an engagement with his own orchestra at the St. Francis Hotel in San Francisco in 1933. The following year, Jurgens signed a contract with Decca Records, and recorded extensively for the label between 1934 and 1940. Jurgens' vocalist at this time was Eddy Howard.Jurgens held residencies at the Casino Ballroom on Catalina Island, the Elitch Gardens in Denver, the Aragon Ballroom and the Trianon Ballroom in Chicago, and other popular swing venues. He recorded for Vocalion Records in 1938 and for Okeh Records starting in 1940. His first side to reach Your Hit Parade was "It's a Hundred to One You're in Love with Me" in 1939; the following year, "In an Old Dutch Garden" proved to be a big hit. Jurgens often found that Glenn Miller's versions of his hits performed better on the charts than his own, such as the song "Careless". Following Howard's departure from the group in 1940, Harry Cool became its lead singer. Jurgens scored more hits later that year, with "A Million Dreams Ago" and the instrumental "Elmer's Tune", the latter of which Miller would take a vocal version to number one. Later hits included "The Bells of San Raquel" and "Happy in Love" (released on Columbia Records). His biggest hit was 1942's "One Dozen Roses", with Buddy Moreno on vocals; the song hit #1 in the summer of that year.Later in 1942, Jurgens disbanded his group due in no small part to the 1942 recording ban by the American Federation of Musicians. He joined the Marines from 1942 to 1945, directing theater shows for the troops. In 1946 he re-formed his band, recording for Columbia and Mercury into the 1950s. He had his own radio show in 1948 on CBS, and also married in December of that year to Miriam Davidson.Jurgens kept up his group until 1956, by which time his style of swing had long passed out of popular favor. After this he moved to Colorado Springs and founded an electronics business with his brother. He occasionally played at the Broadmoor Country Club in Colorado Springs, and moved to California in 1965, where he again played intermittently. He put together a new band late in the 1960s; he played and recorded with the group on a part-time basis through 1976. His latter years were spent in Sacramento in the real estate business. He sold the rights to his ensemble's name to Don Ring in 1986. He died in 1995 of cancer at age 85.