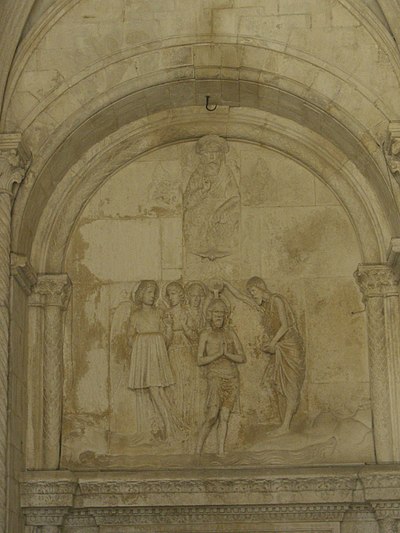 Andrea Nikollë Aleksi (1425–1505), also known as Andrea Alessi or Andrija Aleši, was an Albanian architect, painter and sculptor and considered one of the most prestigious artists of the Dalmatian Renaissance period.He moved to Split in Dalmatia during the Republic of Venice, where he studied under sculptor Mark Troja. He lived most of his life and conducted much of his work in Dalmatia. Aleksi was a disciple of Giorgio da Sebenico, and his best-known work is with Niccolò di Giovanni Fiorentino on the expansion of the chapel of Blessed John of Trogir in 1468.Just like Cathedral of St. James in Šibenik, it was composed out of large stone blocks with extreme precision. It is unique harmony of architecture and sculpture according to antique ideals. From inside, there is no flat wall. In the middle of chapel, on the altar, lays the sarcophagus of blessed John of Trogir. Surrounding are reliefs of puttos carrying torches that look like they were peeping out of doors of Underworld. Above them there are niches with sculptures of Christ and apostles (the principle work of Aleksi), amongst them are putties, circular windows encircled with fruit garland, and a relief of Nativity. All is ceiled with coffered ceiling with image of God in the middle and 96 portrait heads of angels. With so many faces of smiling children the chapel looks very cheerful and there isn’t nothing similar in European art of that time.Andrea is best known for his merchant statues in Ancona, Italy, and his 1454 mural paintings in a church on Arabe island of Dalmatia particularly The Baptistry of Trogir".He signed the Trogir Baptistery in 1467 with: ANDREAS ALEXIUS DURRACHINUS OPIFEX MCCCCXII (Andreas Alexius, artisan from Durrës, 1462).He died in Durrës in 1505.