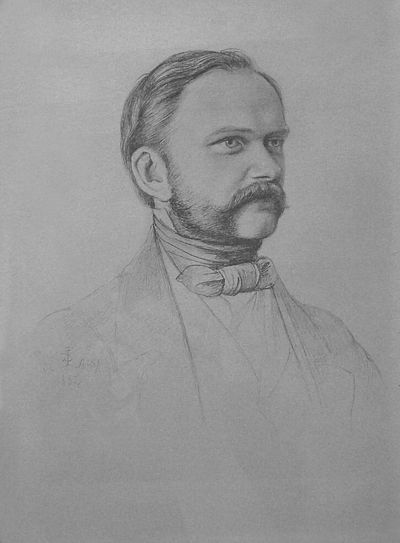 Ferdinand von Arnim (15 September 1814 – 23 March 1866) was a German architect and watercolour-painter. He was a student of Karl Friedrich Schinkel and Ludwig Persius who mainly worked in Berlin and Potsdam.Arnim was born in Treptow an der Rega and studied architecture in Berlin at the King's school of architecture between 1833 and 1838. He became a member of the Berlin Architects' Association in 1839. From 1840 he worked as site foreman under Ludwig Persius; in 1844 he was a building surveyor and in 1845 he opened his own practice, with an aristocratic clientele. He was employed from 1846 as a teacher, and from 1857 as a Professor in the academy of architecture in Berlin. Between 1855 and 1863 Prince Pückler-Muskau employed him in Branitz. 1862 saw him become the advisor on courtly architecture in the Potsdam department of Ludwig Ferdinand Hesse (1795–1876). Apart from these things, he worked as an architect of Prince Frederick Charles of Prussia.Arnim died in Berlin in 1866 and was entombed in the part of the Potsdam-Bornstedt cemetery (near the tomb of his mentor Ludwig Persius); nearby were buried the famous Sello family of court gardeners.