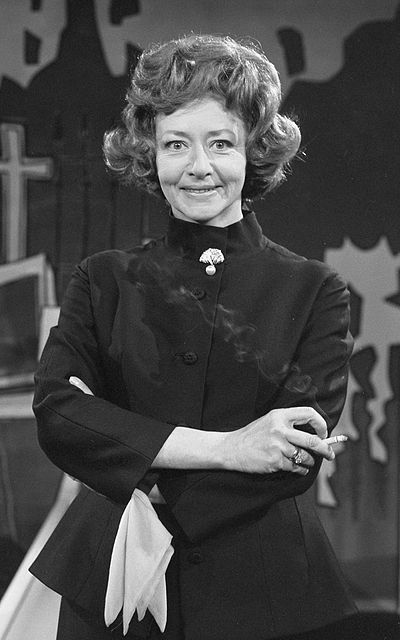 Lore Lorentz (12 September 1920 – 22 February 1994) was a German cabaret artist/standup comedian.She was born in Mährisch-Ostrau in Austria-Hungary (today Ostrava in the Czech Republic), as Lore Schirner. She studied history, German literature and philosophy in Berlin and Vienna. In Berlin she met Kay Lorentz, who became her husband in 1944.Together they founded the famous "Kom(m)ödchen" in Düsseldorf in 1947. It was one of the first political cabarets in Western Germany after the Second World War.Until 1983 Lore and Kay Lorentz were not only the heads of the Kommödchen, they were part of the ensemble at the same time.From 1983, she started with solo programs. One of her most famous programs consisted exclusively of texts written by Heinrich Heine; even though he had written them more than a century before Lorentz' program was performed, they all referred to current topics. Starting 1976 she taught at the chanson and music at Folkwang Hochschule. She received several prizes:1981: Ehrenpreis des Deutschen Kleinkunstpreises1986: Staatspreis des Landes Nordrhein-Westfalen1989: Großer Kulturpreis der Sparkassenstiftung des Rheinischen Sparkassen- und GiroverbandesKay and Lore Lorentz rejected the Bundesverdienstkreuz (Federal Cross of Merit) in 1976.She died in 1994 in Düsseldorf of pneumonia.On Audio CD:Denk ich an Deutschland (A cabaret evening with textes of Heinrich Heine). CD. ISBN 3-931265-00-5 (sold out)Chansons. CD. ISBN 3-931265-01-3Frivolitäten - 10 Diseusen - 10 Chansons. LP. Polydor J 73 555