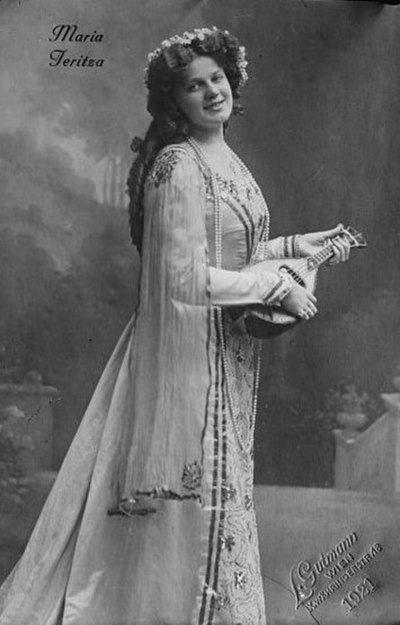 Maria Jeritza (October 6, 1887 – July 10, 1982), born Marie Jedličková, was a celebrated Moravian soprano singer, long associated with the Vienna State Opera (1912–1935) and the Metropolitan Opera (1921-1932 and 1951). Her sensational rise to fame and spectacular beauty and personality earned her the nickname the Moravian thunderbolt.Jeritza was born in Brno. In 1910, she made her debut as Elsa, in Wagner's Lohengrin, at Olomouc. The Emperor Franz Josef heard her and immediately orderded that she be offered a contract at the Imperial Hofoper, Vienna. She created the roles of Blanchefleur in Kienzl's opera Der Kuhreigen (1911), Ariadne in Strauss's Ariadne auf Naxos (1912), the Empress in his Die Frau ohne Schatten (1919), and Marie/Marietta in Korngold's Die tote Stadt (1920), which was also the role in which she debuted at the Metropolitan Opera on November 19, 1921.On November 16, 1926, she starred in the title role of Puccini's Turandot in its North American premiere at the Metropolitan, where she also created the title or leading soprano roles in Leoš Janáček's Jenůfa (1924), Ermanno Wolf-Ferrari's I gioielli della Madonna (1925), Korngold's Violanta (1927), Richard Strauss' Die Ägyptische Helena (1928), and Franz von Suppé's Boccaccio (1931) and Donna Juanita (1932.) She was as popular at the Metropolitan as in Vienna, especially as Tosca, Carmen and Massenet's Thaïs.After a two-year marriage to a man named Wiener, she married an Austrian Baron, Friedrich Leopold Salvator Freiherr Popper von Podhragy (1886-1953). She married her third husband in 1935, Hollywood mogul Winfield R. Sheehan, who died in 1945. In 1948 she married New Jersey businessman Irving Seery and moved to a mansion in the Forest Hill neighborhood of Newark, New Jersey, where she lived until her death in 1982, at the age of 94. She died in Orange, New Jersey, and was buried at Holy Cross Cemetery in North Arlington, New Jersey.Jeritza made a number of 78-rpm recordings which testify to the high quality of her voice. Many of these recordings have been released on CD.