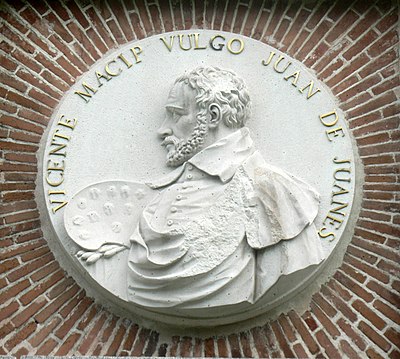 Vicente Juan Masip (also Vicente Macip;Catalan: 'Vicent Joan Masip'; 1475– 1545) (also know as Joan de Joanes (La Font de la Figuera 1507 - Bocairent 1579) was a Spanish painter of the Renaissance period. he was one of the main members, and considered the premier painter, of the Valencian school of painters.His father was Vicente Masip (Andilla 1475 - Valencia 1545) and his son was, Vicente Masip Comes (c. 1555-1623), know as Vicent de Joanes, who imitated his style.[citation needed] His two daughters, Dorotea and Margarita, were also painters.[citation needed] His most prominent pupil was Nicolas Borras.[citation needed]Born in La Font de la Figuera, he is said to have studied his art for some time in Italy due to Sebastiano del Piombo's influence, with which school his affinities are closest, but maybe he never went to Italy, and he received this influence by the italian peintures arriving to Valencia.Furthermore, two italian painters Paolo da San Leocadio and Francesco Pagano, engaged by cardinal Rodrigo Borgia for painting in Valencia Cathedral. Otherwise, the greater part of his professional life was spent in the city of Valencia, where most of the extant examples of his work are now to be found. [[He All relate to religious subjects, and are characterized by dignity of conception, accuracy of drawing, beauty of color, and minuteness of finish. He died at Bocairent (near Xàtiva) while engaged upon an altarpiece in the church there.Since his name Macip made him sound like a laborer (macero), he adopted the name of Joan de Joanes, and the heraldry of that family of nobility. He painted a Raphaelesque Holy Family for the sacristy in the Cathedral of Valencia.He never painted a profane subject, and emulated Luis de Vargas and Fra Angelico, in never painting unless he had undergone holy communion. Painting for him was a solemn exercise, an oratory process, full of prayers and fasts. He never lacked church patronage; the archbishop of Valencia, St. Thomas of Villanova, ordered a set of cartoon panels about the Life of the Virgin to model for some tapestries. He also painted for the churches of the Jesuits, Dominicans, Minims, Augustinians, Franciscans, and for the churches of San Nicolás, Santa Cruz, Carmen Calzado, St Esteban, Corona, Temple, San Andrés, San Bartolomé and San Miguel de los Reyes.Among his best works is the Immaculate Conception painted for the Jesuit church, supposedly inspired by a revelation undergone by the painter's confessor, Father Martin Alberto. Macip also painted portraits.