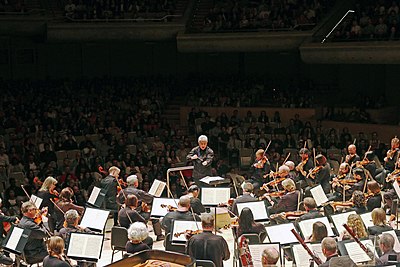 Peter Oundjian (born 21 December 1955, Toronto, Ontario, Canada) is a Canadian violinist and conductor. The youngest of five children from an Armenian father and English mother, Oundjian also claims Scottish ancestry through his maternal grandfather, a Sanderson, and the MacDonell of Glengarry clan. Oundjian was educated in England, where he began studying the violin at age seven with Manoug Parikian. He attended Charterhouse School in Godalming. He continued studies later with Béla Katona. He then attended the Royal College of Music. He further studied at the Juilliard School with Ivan Galamian, Itzhak Perlman, and Dorothy DeLay. While at Juilliard, he minored in conducting, and later received encouragement his endeavors when he attended a master class from the eminent German conductor Herbert von Karajan.In 1980, Oundjian won First Prize at the International Violin Competition in Viña del Mar, Chile. Oundjian became the first violinist of the Tokyo String Quartet and held the post for 14 years. A repetitive stress injury forced Oundjian to curtail his instrumental career. He then shifted his full-time musical focus to conducting.Oundjian was the Artistic Director of the Nieuw Sinfonietta Amsterdam (now the Amsterdam Sinfonietta) from 1998 to 2003. He is also the Artistic Advisor and Principal Guest Conductor of the Caramoor International Music Festival. He was the Principal Guest Conductor of the Colorado Symphony Orchestra for 3 years. For four summers, he led The Philadelphia Orchestra's "Absolutely Mozart" Festival. Oundjian became principal guest conductor and artistic advisor of the Detroit Symphony Orchestra in September 2006.Oundjian was appointed the Music Director of the Toronto Symphony Orchestra (TSO) in January 2003, and assumed the post in 2004. The orchestra had financial problems before the time of Oundjian's appointment, but he has contributed to an improvement in the orchestra's situation since the start of his tenure. The 2005 documentary film Five Days in September: The Rebirth of an Orchestra records the first days of Oundjian's first season as the TSO's music director. In February 2007, Oundjian extended his contract with the TSO to 2012. Following a subsequent contract extension through the 2013-2014 season., in April 2013, the TSO further extended his contract through the 2016-2017 season.Since 1981, Oundjian has taught as an adjunct professor of violin at the Yale University School of Music. In January 2011, the Royal Scottish National Orchestra announced the appointment of Oundjian as its next music director, as of the 2012-2013 season, with an initial contract of 4 years.Oundjian and his wife Nadine have two children. British comedian Eric Idle is his cousin, as their mothers are sisters. In June 2007, Oundjian conducted the world premiere of an oratorio by Idle and John DuPrez based on the Monty Python movie Life of Brian, titled Not the Messiah (He's a Very Naughty Boy), at the first Luminato Festival in Toronto, Canada.