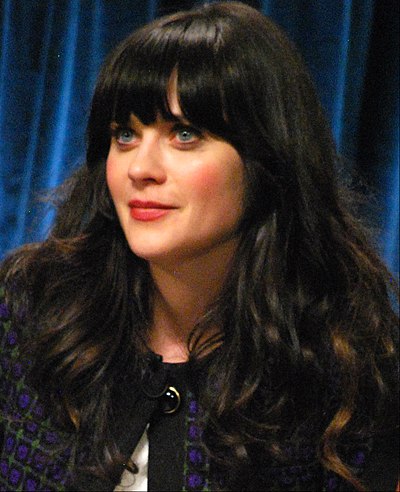 Zooey Claire Deschanel (/ˈzoʊ.iː deɪʃəˈnɛl/; born January 17, 1980) is an American actress, musician, and singer-songwriter. In 1999, Deschanel made her film debut in Mumford, followed by her breakout role as Anita Miller in Cameron Crowe's 2000 semi-autobiographical film Almost Famous. Deschanel soon became known for her deadpan and "Manic Pixie Dream Girl" supporting roles in films such as The Good Girl (2002), Elf (2003), The Hitchhiker's Guide to the Galaxy (2005), Failure to Launch (2006), Bridge to Terabithia (2007), Yes Man (2008), and (500) Days of Summer (2009). She has portrayed the role of Jessica Day in the Fox comedy series New Girl since 2011.For a few years starting in 2001, Deschanel performed in the jazz cabaret act If All the Stars Were Pretty Babies with fellow actress Samantha Shelton. Besides singing, she plays keyboards, percussion, banjo and ukulele. In 2006, Deschanel teamed up with M. Ward to release their debut album Volume One (recorded under the moniker She & Him) which was released in March 2008. Their follow-up album Volume Two was released in the U.S. in March 2010, with their Christmas album A Very She & Him Christmas being released in 2011 and Volume 3 in 2013. She also often sings in her films.