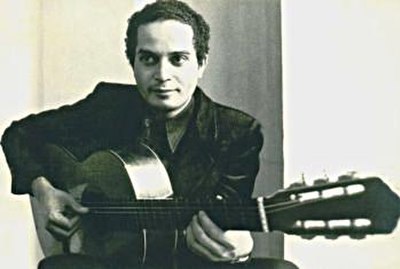 Baden Powell de Aquino (August 6, 1937 – September 26, 2000) usually known simply as Baden Powell, was one of the most prominent and celebrated Brazilian guitarists of his time. He explored the instrument to its utmost limits, playing it in a distinctive, unique manner, incorporating virtuoso classical techniques together with popular harmony and swing. He performed in many styles, including bossa nova, samba, Brazilian jazz, Latin jazz and música popular brasileira. He performed on stage during most of his lifetime, and recorded an extensive discography composed of LP and CD albums produced in Brazil and Europe, particularly in France and Germany.Baden Powell also composed many fine pieces for guitar, such as Xangô, Simplesmente, Braziliense, Horizon, Abração em Madrid, Tristeza e solidão, Consolação, Samba, Casa Velha, Lotus, Imagem, Samba Triste, and Canto de Ossanha.