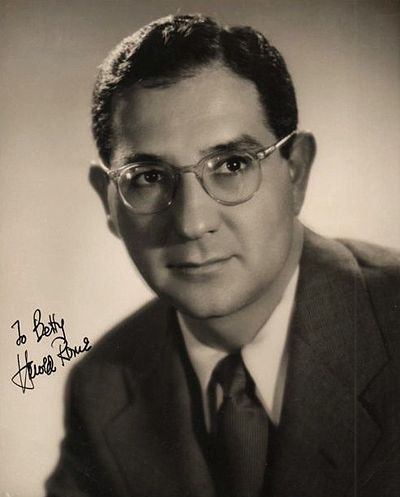 Harold Jacob Rome (May 27, 1908, Hartford, Connecticut – October 26, 1993, New York City, NY) was an American composer, lyricist, and writer for musical theater.Born in Hartford, Connecticut, Rome played piano in local dance bands and was already writing music while studying architecture and law at Yale University. After graduation he worked as an architect in New York City, but continued to pursue his musical interests, arranging music for local bands and writing material for revues at Green Mansions, a Jewish summer resort in the Adirondacks. Much of the music Rome was writing at this time was socially conscious and of little interest to Tin Pan Alley. In 1937, he made his Broadway debut as co-writer, composer, and lyricist of the topical revue Pins and Needles. Pins and Needles was originally written for a small theatrical production directed by Samuel Roland. After a 2 week professional run, it was adapted for performances by members of the then-striking International Garment Workers' Union as an entertainment for its members. Because Roland was associated with left-wing causes, he was asked by ILGWU president David Dubinsky to withdraw. The show was a huge success, running for 1108 performances, and prompted George S. Kaufman and Moss Hart to invite Rome to collaborate on another topical revue, Sing Out the News, in 1938.In the early 1940s, Rome wrote songs for several revues and shows, but it was not until after the end of World War II that he had his next real success with Call Me Mister. His first full-fledged musical was Wish You Were Here in 1952. Additional Broadway credits include Fanny (1954), Destry Rides Again (1959), I Can Get It for You Wholesale (1962), in which Barbra Streisand made her Broadway debut, and The Zulu and the Zayda (1965), which dealt with racial and religious intolerance. He also wrote the lyrics for La Grosse Valise (composer Gerard Calvi), which enjoyed a short run at the 54th Street Theater in 1965. In 1970, he wrote a musical adaptation of Gone with the Wind entitled Scarlett for a Tokyo production with a Japanese cast. It later was staged in English with little success in London and Los Angeles. Rome's music and/or lyrics can be heard in such films as Rear Window, Anchors Aweigh, Thousands Cheer, and Babes on Broadway. In 1991, Rome was presented with a special Drama Desk Award for his "distinctive contribution to musical theater." Rome also was a painter and art collector. He died of a stroke in New York City at the age of 85.