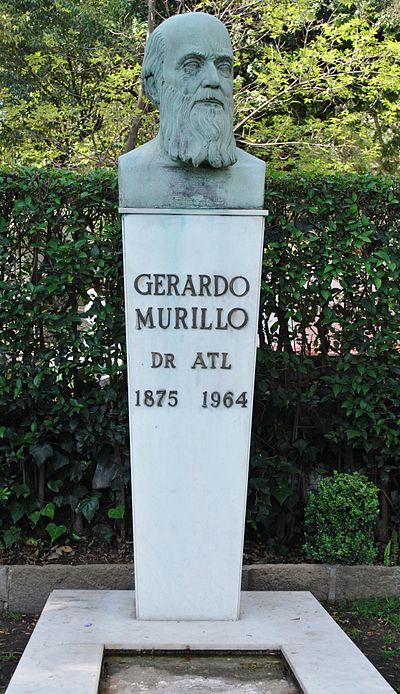 Gerardo Murillo (October 3, 1875 – August 15, 1964) was a Mexican painter and writer who signed his works "Dr. Atl". He was born in Guadalajara, Jalisco, where he began the study of painting at an early age, under Felipe Castro. At the age of 21, Murillo entered the Academy of San Carlos in Mexico City to further his studies.After showing his abilities, Murillo was granted a pension in 1897 by President Porfirio Díaz to study painting in Europe. There he broadened his scope of learning, with study of philosophy and law at the University of Rome, and many trips to Paris to listen to lectures about art given by Henri Bergson. His strong interest in politics led him to collaborate with the Socialist Party in Italy and work in the Avanti newspaper. In 1902 he was baptized "Dr. Atl" (the Nahuatl word for "water") by Leopoldo Lugones.Dr. Atl became very active in Mexico when he returned. In 1906 he participated with Diego Rivera, Francisco de la Torre, Rafael Ponce de Leon and others in an exhibition sponsored by Alonso Cravioto and Luis Castillo Ledon, the editors of the magazine Savia Moderna.In 1911, Dr. Atl returned to Europe. In Paris, he founded a journal and wrote about the social and political issues of Mexico, and criticized Victoriano Huerta. Dr. Atl supported constitutionalists, leaning towards biblical socialism and promoting the growth of art, literature, and science.Dr. Atl's strong love of the outdoors and his active nature are seen in his many paintings which portray the landscapes of his era.[citation needed] Among his interests was the study of volcanoes, and he spent much time visiting both Popocatépetl and Iztaccíhuatl. A book he wrote in 1950, Cómo nace y crece un volcán, el Paricutín ("How a Volcano is Born and Grows – Paricutín"), told of his experience of witnessing the eruption of Paricutín in 1943. His time spent with volcanoes was the cause of a disease which led to the amputation of one of his legs.His literary writings including Cuentos de todos los colores ("Stories of All Colors"), which focuses on the themes of the Mexican Revolution and has been hailed as one of the best narrations of that historical period. His book La Perla ("The Pearl") inspired the writing of the novella, much the same, by John Steinbeck.He gave the Nahuatl name "Nahui Olin" (a symbol of Aztec renewal meaning "four movement," the symbol of earthquakes) to Carmen Mondragón (1893–1978), a Mexican poet and painter with whom he established a very intense love relationship.Dr. Atl received numerous awards for his literature and art, including the Belisario Domínguez Medal of Honor, in 1956, and the National Arts Award in 1958.In 1961 "Alcoa Presents: One Step Beyond" aired an episode based on an experience of Dr. Atl in 1920. The plot description states: "On the run from the authorities, Atl (played by David J. Stewart) takes refuge in a convent that is allegedly haunted by the ghost of an aztec warrior. Of course, Atl is too intelligent a man to believe in such nonsense—until the Federale who is pursuing him is mysteriously strangled to death. The real Dr. Atl makes a guest appearance in the closing scene."He died in Mexico City in 1964.