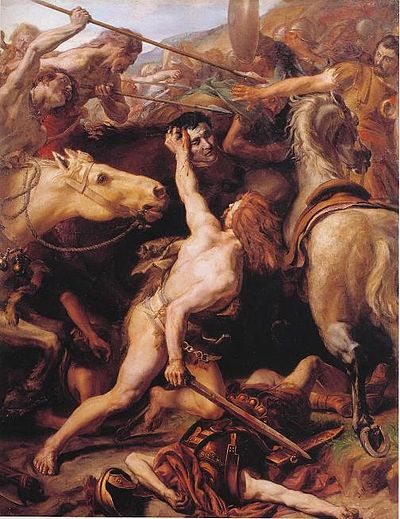 Gaius Flaminius Nepos was a politician and consul of the Roman Republic in the 3rd century BC. He was the greatest popular leader to challenge the authority of the Senate prior to the Gracchi a century later.In the aftermath of the First Punic War, Flaminius, a novus homo, was the leader of a reform movement that sought to reorganize state land in Italy. As tribune of the plebs in 232 BC, he passed a plebiscite that divided the Ager Gallicus (the land south of Ariminum, which had been conquered from the Gauls decades before) and gave it to poor families whose farms had fallen into ruin during the war. Contrary to the constitution and tradition, he did not seek consultation from the Senate, who would have been opposed to this decision.Flaminius was the governor of Sicily in 227. Meanwhile, the reorganization of the land contributed to a renewed attack on Roman territory by the Gauls, whom the Romans finally defeated at the Battle of Telamon in 224. In 223, Flaminius was elected consul for the first time, and with Publius Furius Philus he forced the Gauls to submit to Rome, creating the province of Cisalpine Gaul.In 221, Flaminius was magister equitum to Marcus Minucius Rufus, then in 220 he was chosen as a censor along with Lucius Aemilius Papus. During his term, he arranged for the Via Flaminia to be built from Rome to Ariminum, established colonies at Cremona and Placentia, reorganized the Centuriate Assembly to give the poorer classes more voting power, and built the Circus Flaminius on the Campus Martius. In 218, while serving in the Senate, he was the only senator to support the Lex Claudia, which prohibited senators from participating in overseas trade.In 217, during the Second Punic War and the invasion of Italy by Hannibal, he was re-elected as a consul with Gnaeus Servilius Geminus, in what was considered a rebuke of the Senate's prosecution of the war. Flaminius failed to take the appropriate rituals to become a consul and was under threat of recall by the Senate. Flaminius raised four new legions and marched north to meet Hannibal, but was ambushed at Lake Trasimene. The army was destroyed and Flaminius was killed on 27 April. His supporters in the Senate began to lose power to the more aristocratic factions. The Romans feared that Hannibal would besiege their city. The Senate appointed Fabius Maximus as dictator.