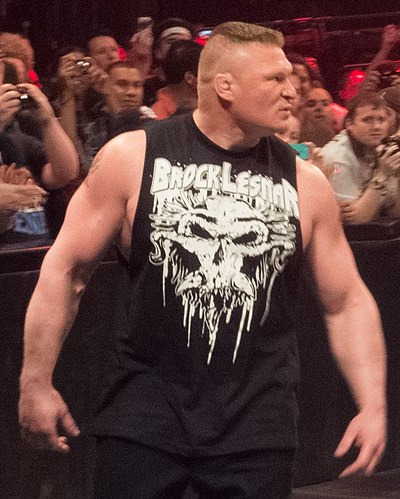 Brock Edward Lesnar(/ˈlɛznər/; born July 12, 1977) is an American professional wrestler and former mixed martial artist, professional football player and amateur wrestler, who is signed with WWE. He is also a former UFC Heavyweight Champion and an accomplished amateur wrestler, winning the 2000 NCAA Division I heavyweight wrestling championship and placing second in 1999 after losing to Stephen Neal.Lesnar gained prominence in World Wrestling Entertainment (WWE) from March 2002 to March 2004, where he is a former three-time WWE Champion. On August 25, 2002, he defeated The Rock at SummerSlam to win the WWE Undisputed Championship, making him the youngest WWE World Heavyweight Champion in history at age 25. Lesnar regained the WWE Championship twice through victories over The Undertaker and Kurt Angle. He was also the 2002 King of the Ring and the winner of the 2003 Royal Rumble. Immediately following WrestleMania XX, Lesnar abruptly left WWE and retired from professional wrestling to pursue a career in the NFL. He played during the preseason for the Minnesota Vikings, but ended up being a late cut. Lesnar returned to professional wrestling at the end of 2005, and joined New Japan Pro Wrestling (NJPW), where he won the IWGP Heavyweight Championship in his first match. He was officially stripped of the title by NJPW in July 2006, and took the physical belt with him to Inoki Genome Federation (IGF), where he was still recognized as IWGP Champion until June 2007.Lesnar started a career in MMA signing with the Hero's promotion, and won his first fight in June 2007. He then signed with the Ultimate Fighting Championship (UFC) in October 2007. He lost his UFC debut against Frank Mir, but defeated Heath Herring in his sophomore fight. He subsequently captured the UFC Heavyweight Championship from Randy Couture on November 15, 2008, then avenged his loss to Mir at UFC 100 to become the Undisputed Champion. After being sidelined from fighting in late 2009 due to diverticulitis, Lesnar returned to defeat the Interim UFC Heavyweight Champion Shane Carwin at UFC 116. Lesnar lost the Heavyweight belt against Cain Velasquez at UFC 121. He was once again stricken with a bout of diverticulitis in May 2011 and had surgery to try to cope with the ailment. Lesnar returned at UFC 141 in December 2011, where he lost to Alistair Overeem and promptly retired from the UFC. In April 2012, Lesnar returned to WWE. On April 6, 2014, Lesnar became the first man to defeat The Undertaker at a WrestleMania event, ending the latter's 21-0 undefeated streak at WrestleMania XXX. Lesnar is a four-time world champion in professional wrestling and is the only man so far to have been the WWE Champion (three times) and IWGP Heavyweight Champion (once), as well as the UFC Heavyweight Champion and NCAA Division 1 Champion.