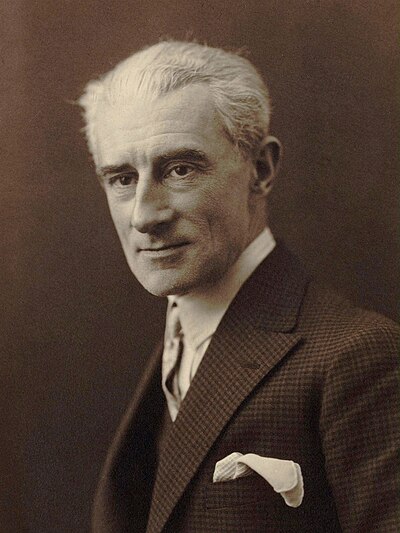 Joseph-Maurice Ravel (March 7, 1875 – December 28, 1937) was a French composer known especially for his melodies, orchestral and instrumental textures and effects. Along with Claude Debussy, he was one of the most prominent figures associated with Impressionist music. Much of his piano music, chamber music, vocal music and orchestral music has entered the standard concert repertoire.Ravel's piano compositions, such as Jeux d'eau, Miroirs, Le tombeau de Couperin and Gaspard de la nuit, demand considerable virtuosity from the performer, and his orchestral music, including Daphnis et Chloé and his arrangement of Modest Mussorgsky's Pictures at an Exhibition, use a variety of sound and instrumentation. Ravel is perhaps known best for his orchestral work Boléro (1928), which he considered trivial and once described as "a piece for orchestra without music".According to SACEM, Ravel's estate had earned more royalties than that of any other French composer.