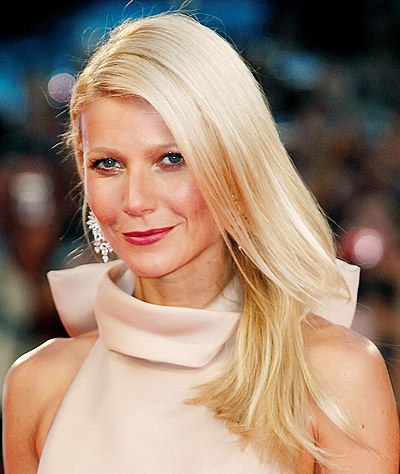 Gwyneth Kate Paltrow (/ˈɡwɪnɨθ ˈpæltroʊ/; born September 27, 1972) is an American actress, singer, and food writer. She made her acting debut on stage in 1990 and started appearing in films in 1991. After appearing in several films throughout the decade, Paltrow gained early notice for her work in films such as Seven (1995) and Emma (1996) (in which she played the title role).Following the films Sliding Doors (1998) and A Perfect Murder (1998), Paltrow garnered worldwide recognition through her performance in Shakespeare in Love (1998), for which she won an Academy Award for Best Actress, a Golden Globe Award and two Screen Actors Guild Awards, for Outstanding Lead Actress and as a member of the Outstanding Cast. She also won an Emmy Award for Outstanding Guest Actress in a Comedy Series in 2011 for her role as Holly Holliday on the Fox hit TV show Glee in the episode "The Substitute". In April 2013, she was named "Most Beautiful Woman" by People Magazine.Paltrow has portrayed supporting, as well as, lead roles, in films such as The Talented Mr. Ripley (1999), The Royal Tenenbaums (2001), Shallow Hal (2001), and Proof (2005), for which she earned a Golden Globe nomination as Best Actress in Motion Picture Drama. Since 2008 she has portrayed Pepper Potts, the love interest of Iron Man in the Marvel Cinematic Universe, in Iron Man (2008), Iron Man 2 (2010), The Avengers (2012), and Iron Man 3 (2013). Paltrow has been the face of Estée Lauder's Pleasures perfume since 2005.She is married to Chris Martin, the lead vocalist of Coldplay, with whom she has had two children, Apple and Moses. They announced their separation, however, in March 2014, through her blog, Goop.com. She is also the face of American fashion brand Coach, owner of the lifestyle company Goop.com and author of two cookbooks: My Father's Daughter: Delicious, Easy Recipes Celebrating Family & Togetherness, and It's All Good.