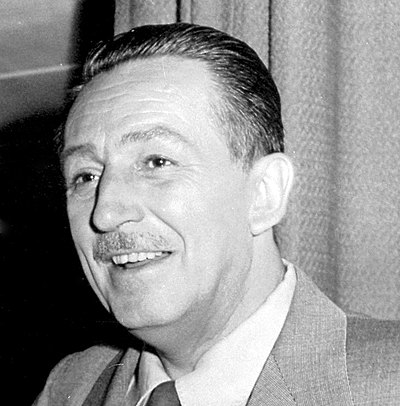 Walter Elias "Walt" Disney (/ˈdɪzni/; December 5, 1901 – December 15, 1966) was an American business magnate, animator, cartoonist, producer, director, screenwriter, philanthropist and voice actor. A major figure within the American animation industry and throughout the world, he is regarded as an international icon, well known for his influence and contributions to the field of entertainment during the 20th century. As a Hollywood business mogul, he, along with his brother Roy O. Disney, co-founded Walt Disney Productions, which later became one of the best-known motion picture production companies in the world. The corporation is now known as The Walt Disney Company and had an annual revenue of approximately US$45 billion in the 2013 financial year.As an animator and entrepreneur, Disney was particularly noted as a film producer and a popular showman, as well as an innovator in animation and theme park design. He and his staff created some of the world's most well-known fictional characters including Mickey Mouse, for whom Disney himself provided the original voice. During his lifetime he received four honorary Academy Awards and won 22 Academy Awards from a total of 59 nominations, including a record four in one year, giving him more awards and nominations than any other individual in history. Disney also won seven Emmy Awards and gave his name to the Disneyland and Walt Disney World Resort theme parks in the U.S., as well as the international resorts like Tokyo Disney Resort, Disneyland Paris, and Hong Kong Disneyland.He died on December 15, 1966, from lung cancer in Burbank, California. A year later, construction of the Walt Disney World Resort began in Florida. His brother, Roy Disney, inaugurated the Magic Kingdom on October 1, 1971.