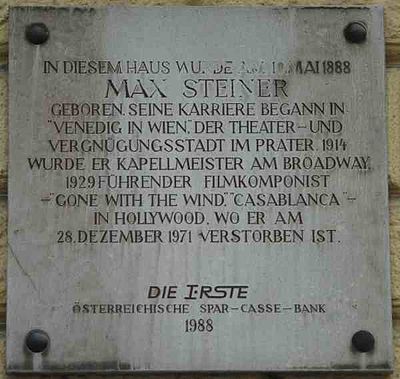 Maximilian Raoul "Max" Steiner (May 10, 1888 – December 28, 1971) was an Austrian-born American composer of music for theatre and films. He was a child prodigy who conducted his first operetta when he was twelve and became a full-time professional, either composing, arranging or conducting, when he was fifteen.He worked in England, then Broadway, and moved to Hollywood in 1929 where he became one of the first composers to write music scores for films. Steiner is referred to as "the father of film music" and is considered one of the greatest film score composers in the history of cinema. Along with such composers as Dimitri Tiomkin, Franz Waxman, Erich Wolfgang Korngold, Alfred Newman and Miklós Rózsa, Steiner played a major part in creating the tradition of writing music for films.Steiner composed over 300 film scores with RKO and Warner Brothers, and was nominated for 24 Academy Awards, winning three: The Informer (1935), Now, Voyager (1942), and Since You Went Away (1944). Besides his Oscar-winning scores, some of Steiner's popular works include King Kong (1933), Little Women (1933), Jezebel (1938), Casablanca (1942), and the film score for which he is possibly best known, Gone with the Wind (1939).He was also the first recipient of the Golden Globe Award for Best Original Score, which he won for his score to Life with Father. Steiner was a frequent collaborator with some of the most famous film directors in history, including Michael Curtiz, John Ford and William Wyler, and scored many of the films with Errol Flynn, Bette Davis, Humphrey Bogart and Fred Astaire. Many of his film scores are available as separate soundtrack recordings.