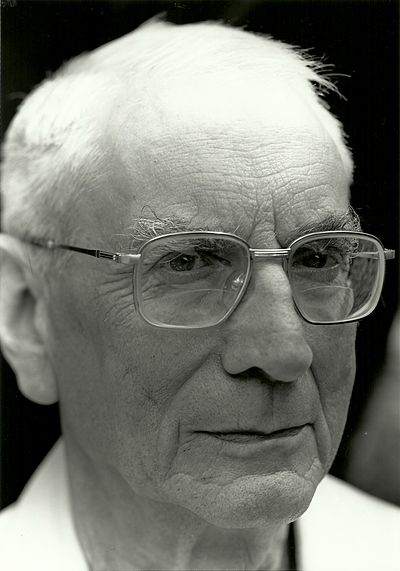 Pierre Hadot (French: [ado]; February 21, 1922 – April 24, 2010) was a French philosopher and historian of philosophy specializing in ancient philosophy, particularly Neoplatonism. Hadot was ordained in 1944 but following Pope Pius XII’s encyclical Humani generis (1950) left the priesthood. He was director at the École des hautes études en sciences sociales (EHESS) from 1964 to 1986 and was named professor at the Collège de France in 1982, where he held the Chair of History in Greek and Roman Thought (chaire d'histoire de la pensée hellénistique et romaine). He retired from this position to become professeur honoraire at the Collège in 1991. He was latterly married to the historian of philosophy, Ilsetraut Hadot. He was one of the first authors to introduce Ludwig Wittgenstein's thought into France. Hadot suggested that one cannot separate the form of Wittgenstein's Philosophical Investigations from their content. Wittgenstein had claimed that philosophy was an illness of language and Hadot notes that the cure required a particular type of literary genre. Hadot is also famous for his analysis on the conception of philosophy during Greek Antiquity. Hadot identified and analyzed the "spiritual exercises" used in ancient philosophy (preceding Michel Foucault’s interest for such practices in the second and third volumes of his History of Sexuality). By "spiritual exercises" Hadot means "practices ... intended to effect a modification and a transformation in the subjects who practice them. The philosophy teacher's discourse could be presented in such a way that the disciple, as auditor, reader, or interlocutor, could make spiritual progress and transform himself within." Hadot shows that the key to understanding the original philosophical impulse is to be found in Socrates. What characterizes Socratic therapy above all is the importance given to living contact between human beings. Hadot's recurring theme is that philosophers should be judged by how they live their lives, what they do, not what they say; that philosophy is best pursued in real conversation and not through written texts and lectures; and that philosophy, as it is taught in universities today, is for the most part a distortion of its original, therapeutic impulse. He brings these concerns together in What Is Ancient Philosophy?, which has been critically reviewed.