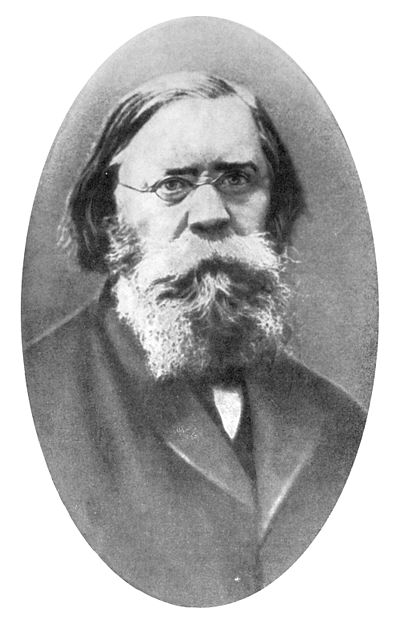 Pyotr Lavrovich Lavrov (Russian: Пётр Ла́врович Лавро́в; alias Mirtov (Миртов); (June 2 (June 14 N.S.), 1823 – January 25 (February 6 N.S.), 1900) was a prominent Russian theorist of narodism, philosopher, publicist, and sociologist.He entered a military academy and graduated in 1842 as an army officer. He became well-versed in natural science, history, logic, philosophy, and psychology. He also became an instructor in mathematics for two decades.Lavrov joined the revolutionary movement as a radical in 1862. His actions led to his being exiled to the Ural Mountains in 1868 from which he soon escaped and fled abroad. In France, he lived mostly in Paris, where he became a member of the Anthropological Society. Lavrov had been attracted to European socialist ideas early on, though at first he did not know how they applied to Russia. While he was in Paris, Lavrov fully committed himself to the revolutionary socialist movement. He became a member of the Ternes section of the International Workingmen's Association in 1870. He was also present at the start of the Paris Commune, and soon went abroad to generate international support.Lavrov arrived in Zürich in November 1872, and became a rival of Mikhail Bakunin's in the "Russian Colony". In Zürich he lived in the Frauenfeld house near the university. Lavrov tended more toward reform than revolution, or at least saw reform as salutary. He preached against the conspiratorial ideology of Peter Tkachev and others like him. Lavrov believed that while a coup d'état would be easy in Russia, the creation of a socialist society needed to involve the Russian masses. He founded the journal Forward! in 1872, its first issue appearing in August 1873. Lavrov used this journal to publicize his analysis of Russia's peculiar historical development.Lavrov was a prolific writer for more than 40 years. His works include The Hegelian Philosophy (1858–59) and Studies in the Problems of Practical Philosophy (1860). While living in exile, he edited his Socialist review, Forward!. A contribution to the revolutionary cause, Historical Letters (1870) was written under the pseudonym Mirtov. The letters greatly influenced the revolutionary activity in Russia. He was called "Peter Lawroff" in Die Neue Zeit (1899–1900) by K. Tarassoff.