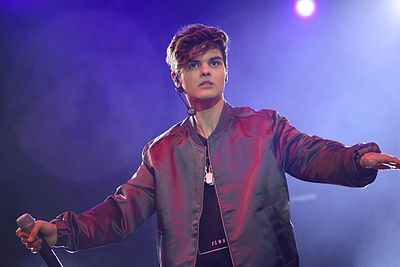 Abraham Mateo Chamorro (born 25 August 1998) is a Spanish teen actor and pop singer, who is currently signed to the record label Sony Music Spain.Mateo was discovered in 2009, when he was ten, by executives of EMI Music Spain, who happened across his performances in the television show Menuda Noche on the Canal Sur TV of Andalucia, Spain. His self-titled debut album, Abraham Mateo, was released in Spain in December 2009. The album was produced by the Spanish composer and producer Jacobo Calderon, who has worked before with internationally recognized Latin singers such as Raphael, David Bisbal, and Luis Fonsi. His second studio album, AM, recorded in Madrid and Miami, with Sony Music Spain, was released in November 2013.