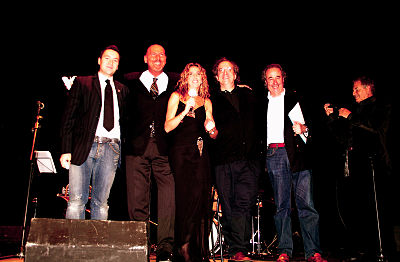 Edgardo “Dado” Moroni (born October 20, 1962) is an Italian jazz pianist and composer.A self-taught musician, Dado, who was born in Genoa, Italy, started playing piano at age four. By his mid-teens he was playing professionally around Italy and by age 17 had recorded his first album.Throughout the 1980s Dado worked mostly in Europe playing at festivals and in clubs, including a long stint as part of former Duke Ellington bassist Jimmy Woode’s trio at Widder Bar in Zurich. Dado moved to the U.S. in 1991, becoming part of the New York jazz scene, and appearing regularly both as a leader and sideman, in some of the city’s most prestigious clubs, including Blue Note, Birdland, Village Vanguard as well as recording several CDs.During his 35-year career Dado has played with legends including Freddie Hubbard, Clark Terry, Zoot Sims, Harry “Sweets” Edison, Ray Brown, Ron Carter, Oscar Peterson, Ahmad Jamal, Hank Jones, Niels-Henning Ørsted Pedersen and Alvin Queen. A highly respected musician, at age 25 he was granted the honor of serving as a juror at the prestigious Thelonious Monk International Piano Competition in 1987.Based in Italy, Dado continues to perform worldwide. In 2007 he won the Italian Jazz Awards as Best Jazz Act. In 2009 Dado was named Best Italian Jazz Pianist in the Top Jazz referendum sponsored by Musica Jazz magazine. In 2010 he was appointed Professor of Jazz Piano at Giuseppe Verdi Conservatory of Music in Turin, a position he currently holds.Dado is married to Ada Toure.