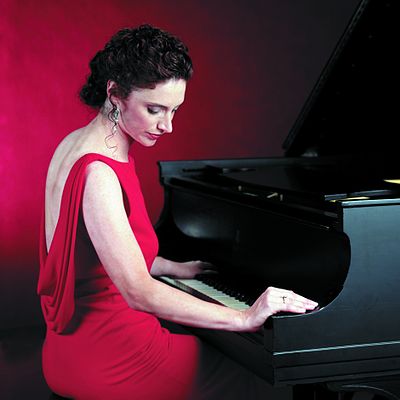 Robin Spielberg (born 1962) is an American pianist, composer and author. Raised in the suburban town of Maplewood, she attended Michigan State University and later Tisch School of the Arts at New York University, graduating from NYU with honors and a BFA in Undergraduate Drama. She has released sixteen albums of piano music. She currently lives in New Freedom, Pennsylvania.Robin Spielberg's paternal grandfather, Rubin Spielberg was a flutist who performed with the NBC Symphony Orchestra under the direction of Arturo Toscanini and the Metropolitan Opera. Although they never met, in her memoir she credits him with providing creative inspiration and imparting life lessons through dreams during childhood. She began formal piano lessons at the age of seven.She is a founding member of the Atlantic Theatre Company and acted in dozens of plays with the company including Boys' Life and The Lights by Howard Korder at Lincoln Center. She composed music for several Atlantic Theater Company productions including the David Mamet adaptation of Three Sisters directed by William H. Macy and two children's plays written by David Mamet airing on National Public Radio (NPR): The Poet and the Rent and The Revenge of the Space Pandas. In 1992, Spielberg and Barry Shulak co-wrote a musical for young audiences entitled Balloonland. Originally produced in Vermont by the Atlantic Theater Company, Balloonland later debuted off-Broadway on ATC's New York City stage in 1993.As of 2013, Spielberg has recorded sixteen albums and appears on over fifty compilations. Her debut album of original piano solos entitled Heal of the Hand was recorded independently in 1993. The album was picked up by the indie label North Star Music in 1994, and became their best-selling CD of the decade. According to North Star president Richard Waterman, Spielberg sold between 160,000 and 200,000 albums during 1995 and 1996, although SoundScan only registered 1,800 sales, with the bulk of sales through specialist outlets. By 1999 she had reportedly sold 300,000 albums.Spielberg's original 1994 agreement with North Star Music was a six-record deal, covering recording and release of two albums per year over the course of three years. During this period, the following titles were released under the North Star label: Heal of the Hand (1993), Spirit of the Holidays (1994) featuring Christmas-themed tracks, Unchained Melodies (1995), In the Heart of Winter (1995), Songs of the Spirit (1996), and In the Arms of the Wind (1997). Additional titles subsequently released by North Star include Mother (1999) and Spa Piano (2007). The former is a collaboration with singers Cathie Ryan and Susan McKeown featuring songs celebrating motherhood. When North Star folded in 2011, Spielberg bought back the masters for her albums released under that label.Beginning in 2000, Spielberg started releasing albums under her own playMountain Music label. Titles released under playMountain Music are Beautiful Dreamer (2000), Dreaming of Summer (2000), The Christmas Collection (2002), American Chanukah (2002), With a Song in My Heart (2004), Memories of Utopia (2005), A New Kind of Love (2008), and Sea to Shining Sea: A Tapestry of American Music (2010).In addition to her recording career, Spielberg also served as an inaugural member of the Independent Music Awards' judging panel.Spielberg was added to the Steinway Artist Roster in 1996. She is a national celebrity artist spokesperson for the American Music Therapy Association. As spokesperson, Spielberg often conducts seminars and workshops on the transformative power of music in hospitals, schools and community centers while on tour. She has also performed fundraisers for medical and other charities. She has toured nationally and overseas. Performance highlights include three sold-out performances at the Weill Recital Hall at Carnegie Hall (New York City).She has toured South Korea three times appearing at KBS Hall, Seoul Arts Center and the LG Arts Center (2010). She is signed with Sony/ATV Music Publishing in Asia. Spielberg's piece, "An Improvisation on the Canon in D" is used in the soundtrack of the South Korean television drama series Winter Sonata.[citation needed]She is author of the memoir Naked on the Bench (2013), which Kirkus called a "well-paced musical memoir about the value of perseverance" which avoids sentimentality and balances happy moments with darker content such as being stalked. Spielberg also writes about music therapy in her memoir.