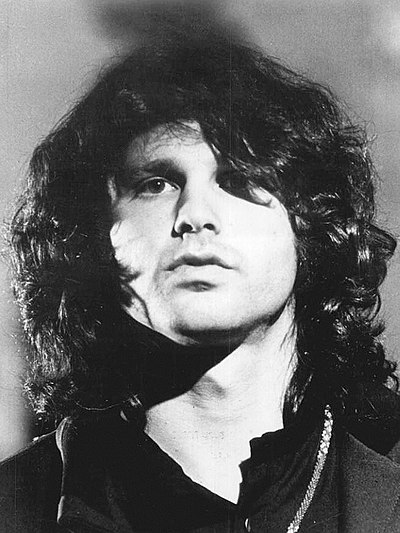 James Douglas "Jim" Morrison (December 8, 1943 – July 3, 1971) was an American singer-songwriter and poet, best remembered as the lead singer of Los Angeles rock band The Doors. From a young age, Morrison became infatuated with the works of Friedrich Nietzsche, Arthur Rimbaud and Jack Kerouac, often incorporating their work into his lyrics. In his later life, Morrison developed an alcohol dependency which led to his death at the age of 27 in Paris. He is alleged to have died of a heroin overdose, but as no autopsy was performed, the exact cause of his death is still disputed.Due to his songwriting, voice, wild personality and performances, he is regarded by critics and fans as one of the most iconic and influential frontmen in rock music history. He was also well known for improvising spoken word poetry passages while the band played live. Morrison was ranked number 47 on Rolling Stone's list of the "100 Greatest Singers of All Time", and number 22 on Classic Rock Magazine's "50 Greatest Singers In Rock".Ray Manzarek said that Morrison "embodied hippie counterculture rebellion..." Morrison was also known as the self-proclaimed "King of Orgasmic Rock".