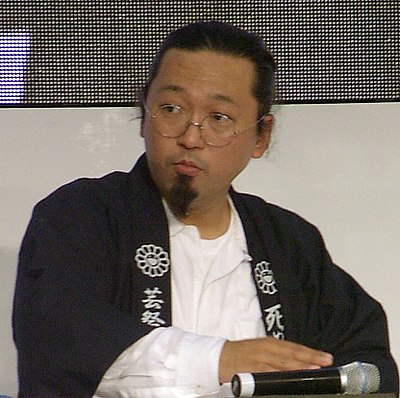 Takashi Murakami (村上 隆, Murakami Takashi, born February 1, 1962) is an internationally prolific contemporary Japanese artist. He works in fine arts media—such as painting and sculpture—as well as what is conventionally considered commercial media —fashion, merchandise, and animation— and is known for blurring the line between high and low arts. He coined the term superflat, which describes both the aesthetic characteristics of the Japanese artistic tradition and the nature of post-war Japanese culture and society. Superflat is also used as a moniker to describe Murakami’s own artistic style and that of other Japanese artists he has influenced.Murakami is the founder and President of Kaikai Kiki Co., Ltd., through which he manages the careers of several younger artists and organizes the biannual art fair GEISAI.