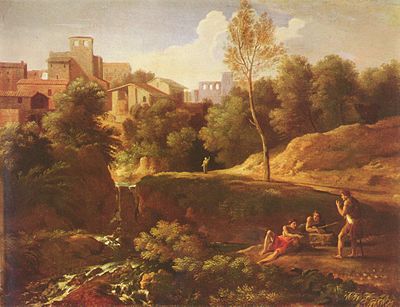 Gaspard Dughet (15 June 1615 – 27 May 1675), also known as Gaspard Poussin, was a French painter born in Rome.A pupil of Nicolas Poussin, Gaspard Dughet was the brother of Poussin's wife. He devoted himself to landscape painting and rendered admirably the severer beauties of the Roman Campagna; a noteworthy series of works in tempera representing various sites near Rome is to be seen in the Colonna Palace; but one of his finest easel-pictures, the Sacrifice of Abraham, formerly the property of the Colonna, is now, with other works by the same painter, in the National Gallery, London. He worked with Pier Francesco Mola, Cozza, and Mattia Preti at the Palazzo Pamphili in Valmontone. The frescoes executed by Dughet in San Martino ai Monti are in a bad state of preservation. The Louvre does not possess a single work by his hand. Dughet died in Rome on 27 May 1675.